Here’s the sister track to the previous post – the last track of the album. It’s the same song, another take, with the sax solo in the middle this time. They changed the name of the track for some reason.

It’s an eight-bar section, all over the F# pentatonic minor blues scale. It’s really just four licks. I love the F#-C lick (tonic to flat five – using the tritone). I also like how percussive the articulation is, you really need to spit it out!

I’ve been really getting in to the new Tower of Power album – The Soul Side of Town. Tommy P takes a million solos on it, and this is the first one, right out of the gate.

It’s only four bars, but it’s a killer! The altissimo isn’t too high, but he gets around pretty fast. The way he crossed the break in the first bar is amazingly clean. He sticks to the blues scale, and does a trill on the last note, which was unexpected but cool.

This track is very much in the style of ‘Oakland Stroke’, opening and closing the album with a (mostly) instrumental jam. Burning solos by my pal Roger Smith on the organ as well! I’ll work on the closing track next, it’s got a longer solo.

And now for something totally different! By request, here is the guitar duel from the Eagle’s Hotel California. This is probably their biggest hit, if not one of the biggest hits of all time from any band!

This is the first time I’ve attempted a guitar transcription here. It’s super-tough to match the phrasing and technique. Saxophone and guitar are both very expressive instruments, but in very different ways, which makes for a challenge.

The range also makes it tough. The Joe Walsh solo spans almost three octaves. I’d like another shot at that high Ab that I missed 🙂

I did my best to notate the articulation. I’m not a guitar player, but it sounds to me like not every note is picked, some are played by sliding the left hand from one fret to another. The more I could match the articulation, the closer I got to the feel of the guitar part.

In this song, Don Felder plays first. He takes an eight-bar solo and then Joe Walsh takes eight bars. Then they trade two bars each, and then they duet the rest of the way out.

I understand that Don Felder recorded an instrumental demo to pitch to the band, which included both solos and the duet. Don Henley made them stick to those solos for the final recording, although the key changed.

I spent so much time shedding the solo parts that I totally neglected the arpeggios at the end. I figured I’d just read them, but the key threw me in a few spots – oops! 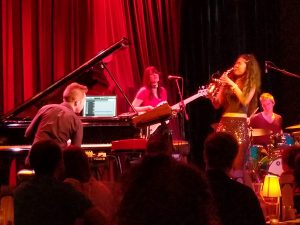 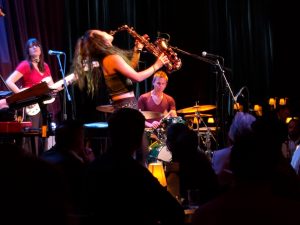 Quick transcription this week – by request, here is David Bowie’s Alto solo from ‘Sorrow’. Nice and short, only eight bars. He establishes a simple theme in the first two bars, repeats it in the second, varies it up a fourth on the key change, and then re-states to end the solo.

David Bowie was an amazing vocalist, performer, and writer. He’s not known as an influential saxophonist, but I commend him for playing the parts himself to fulfill his musical vision.

This is actually a cover of a song originally recorded by The McCoys in 1965, and again by the Merseys in 1966. Neither have this instrumental part. The McCoys version uses harmonica instead. Bowie covered this in 1973 on the album Pin Ups, which is all cover music. I found a live recording on YouTube from the Serious Moonlight tour in 1984 where there is a much longer saxophone solo played no by Bowie but by Steve Elson (I think)

Another Grace/Leo duet. It’s a short one this week. Leo plays the bass part. Grace accompanies him in the beginning, then drops out until her solo. It’s only four bars, and for some reason my fingers kept getting tangled up in the first phrase. She comes back in with the accompaniment, and they finish it off with an altissimo ‘freak out’ before the big last note.

Big thanks to Derek Brown of the BeatBoXSAX channel. He posted a great video tutorial on the ‘overtone gliss’ technique, which is what Leo uses a lot, including the end of this video.

I’ve got to work on it a lot more, but it helped me get the basic concept and tongue position worked out, which had me a bit stumped before.

I’m off to New York for a few days, maybe I’ll get lucky and catch Leo in the subway (although I think he’s too big for that now)! I should get back to Seattle just in time to catch Grace at the Jazz Alley. I’ve never seen her live, so I’m not sure what to expect. I’m guessing it will be a bit more reserved than this video is! I don’t know how the two of them play what they do while dancing in the streets of New York and jumping up and down. I have a hard enough time playing standing still! More power to them…