All of the transcriptions on this site were done by me…one note at a time. It became enough of an obsession with me that I figured I’d share my work with the rest of the world through this blog. But how did we get here?

In high school, I started to get deeply immersed in jazz saxophone playing. This led me to attend the Jamey Aebersold summer jazz workshop where one of the classes was on transcription. I didn’t even know what the term meant before the class, but when I listened to John Coltrane’s “Giant Steps” while watching the notes fly by on the page, I was hooked.

It blew me away to think that someone could play something like “Giant Steps” to begin with. But to think that someone could actually listen to it, write down what was played, and then play it themselves was mind-boggling to me at the time. I assumed that this was some exotic, advanced technique that only the masters could approach. But I was happy to discover that there were a wealth of books containing these magical transcriptions, and I began to collect and study them.

Later, one of my private teachers introduced me to the concept in a more approachable way. He made me pick out a solo to transcribe myself. I chose Sonny Stitt’s “Can’t We Be Friends” (amazon). I listened to it religiously, even while I slept!

I eventually worked out the solo. It was hard, but I did it. And I felt such a sense of accomplishment! More importantly, I could play along with it, which I discovered to be a great way to develop your sense of sound, phrasing, style, articulation, and pitch.

Down the rabbit hole

I got really in to transcription. I had an old tape cassette boom-box (this was the 80s) that I practically wore out. I saved my money to buy a Marantz tape deck. It had a pitch control knob and could even slow recordings down by 50% (as well as dropping the pitch an octave). 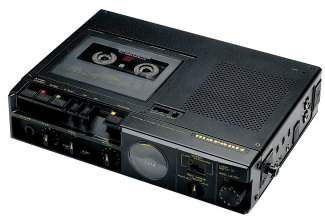 My college years were a bit more ‘focused’. I was playing a lot so my individual practice time was more limited. When I was transcribing, it was usually working out parts for a jazz combo or horn section. I hadn’t lost my love of transcribing, it had just gotten channeled into more immediately useful output. I also got heavily into using Finale to put my music into the computer. In the early days, this slowed things down A LOT (it’s gotten way better). It also made it harder to transcribe solos for me (more on this later).

A few years ago, a friend of mine turned me on to an acapella version of “All The Things You Are” on YouTube. I hadn’t been doing much transcribing, but this solo was so amazing that I HAD to transcribe it. I had no choice. It was hard, but not impossible with the aid of modern technology (more on this later). I still can’t play large parts of this solo up to speed, but that’s not always the end game. My passion for transcription had been re-kindled. Now what to do?

Around this time I saw one of many amazing Maceo Parker shows. Maceo had been a frequent subject of my transcriptions, and I was constantly amazed that more saxophone players weren’t checking him out. I went on a kick cataloging and transcribing every Maceo solo that I could find (there are a ton out there). Somewhere along the way I got the idea that someone should publish a book of Maceo solos. Why not me? I spent many hours compiling my transcriptions into a presentable form and got feedback from my friends. It looked great! The next time Maceo came to Seattle I met briefly with his manager to discuss the possibility of getting a book published. Although they were initially receptive to the idea, it never panned out. It’s not surprising really. The physical book publishing industry is not very lucrative for such a niche product. It’s a lot of work for the artist for very little (if any) return. So the book sits on my shelf unpublished.

Since I had largely exhausted the catalog of Maceo Parker solos to transcribe, I turned my attention to one of my other musical idols: Lenny Pickett. Of course I started with his classic live solo on “Knock Yourself Out” (amazon). After that, I went down the list of every published solo I could find. It would be great to have a compilation of his Saturday Night Live opening and closing credits solos – it would be hours long (but amazing)!

So I’ve got all of these transcriptions filling up my hard drive. Publishing them is more trouble than it’s worth, so what to do? Why not just give them away? I could just dump them all on a file share and be done with them, but where’s the fun in that? I decided to turn this into a project that helps both me and you at the same time.

It helps me because the format I’ve settled on for this blog is to record myself playing each transcription. So I have to actually sit down and practice them to the point where they are good enough to record. Not perfect, but good enough. As the father of a toddler, practice time has been thin over the last few years. So having a project to work towards will (hopefully) help with that.

Hopefully this blog help you (the reader) as well. You can just download the transcriptions and be on your way, or you can stop to read about them and what I’ve learned along the way. Hopefully it’s all beneficial, and maybe a few people will drop a few kind (and/or critical) words in my inbox from time to time. I don’t expect that anything more than that, but if this blog leads to other opportunities (playing, teaching, writing, speaking, etc.) I won’t complain!

Oh yeah…what’s up with “SDart”? It’s kind of an inside joke…My day job is in the tech industry, I spent about 15 years working at Microsoft, where everyone is identified by their email alias (the part of their email address before the @ symbol). Your alias is a combination of your first and last name. For example, Bill Gates was BillG. Scott Dart became SDart. After 15 years, it stuck with me…

Tell me what you think!

3 Replies to “About this site”