I’m still working my way through Prince’s “One Night Alone – Live” box set. Back to Candy this time.

This track is a great example of why I love this box set so much – it’s so diverse. The track starts off as a pop ballad, but transitions to a straight ahead jazz waltz. The whole solo is in 3/4 (which I need to do more of BTW), and has some nice lines in it. It’s very different from what you normally hear from Prince (or Candy for that matter).

Coincidentally, this happens to be my first post with my new Alto! I know it seems odd to christen a Conn with a Candy Dulfer transcription instead of a Cannonball one, but that’s life. I think it works really well! I probably won’t use it exclusively, the horn needs a lot of work, but I also need a lot of work on it. Today was the first chance I’ve really had to play it for more than a few minutes.

I love how responsive the altissimo is – I just need to teach my brain where to find the notes. My body wants to go where they are on my Mark VI, which doesn’t work on the Conn.

I’ve played the same Mark VI Alto for almost 30 years now. It’s a good horn, but not a great one. I’ve played other Mark VIs that were better, but I’ve never played a ‘modern’ horn that came close to it in any aspect.

For years now I’ve been on the lookout for a ‘backup’ horn. I know that my Mark VIs are irreplaceable. The market for them has gone through the roof. If anything happened to any of mine, it would be very difficult to replace any of them. Searching for the right horn would take time, and once I found it I’d have to pay dearly for it.

Further, I can’t really get my horns worked on because I can’t be without any of them for more than a few days at a time. Having a backup just makes sense. 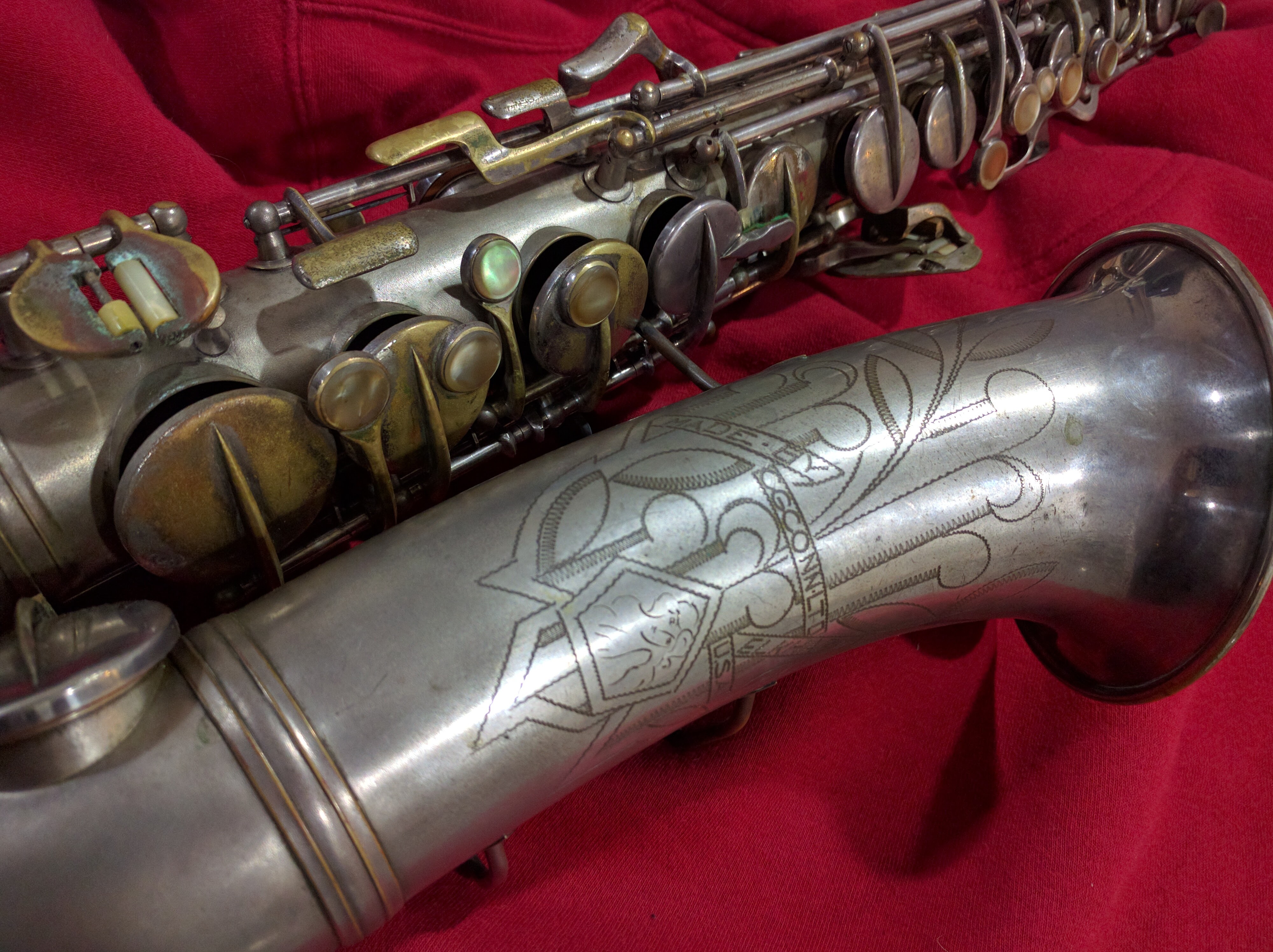 So when my friend Rick mentioned that he was considering selling his Conn 6M, I was intrigued. It seems like all of the players in Seattle have switched from Selmer to Conn in the past five years, or maybe I’m just starting to notice it? I’ve played Conns before, but mostly Tenors and not Alto. My biggest complaint is that the keywork feels antiquated. The ergonomics are just not there, and there seem to be many rube-goldberg-esque mechanisms that are overly complicated and prone to failure.

But, that sound! As soon as I played this horn I could tell that it was a player. It definitely needs some work. There are notes that can’t really be played, and the micro-tuner (which is new to me), wobbles when  you play. But the horn is really responsive, and seems to play pretty well in tune (perhaps better than my Mark VI). The altissimo pops right out!

It’s going to take some work, and some adjustment on my part, but I’m digging the new horn so far. I don’t know if it will ever become my primary horn, but we’ll see how I feel once I get it back into fighting shape. The next challenge is finding a good repair guy in Seattle. I’ve been taking my horns to Paul Maslin in Chicago since he sold me the Mark VI 30 years ago, but I don’t get out that way as often as I used to.

This is another classic Maceo solo over a heavy jazz/funk groove. The bass player starts out walking in 4 and then slips into a funky groove. The horn lines from this song remind me of Charles Mingus for some reason. Heavy jazz inspiration. I love the versatility in this box set!

The solo is nice and short, and not too difficult to play. He does get up to high G twice, but otherwise it’s pretty straightforward for an intermediate player to learn if you start slow and work up the tempo.

Happy birthday Stevie Wonder! Instead of waiting to celebrate these legends after they pass, I figure I should be celebrating them NOW while they are still with us.

So I grabbed this Stevie Wonder solo off of the famous Chaka Khan track “I Feel For You”. The song was written by Prince, so my Prince tribute streak is still intact 🙂 I love both versions of this song – Chaka’s version, which is probably much more well known, as well as Prince’s original studio recording.

But this track features an absolutely burning solo by Stevie Wonder on the chromatic harmonica. This track has peak 80’s production values: heavy reverb, delay, etc. so it can be hard to pick out what’s going on under the wash of effects, but Stevie’s playing is great. The harmonica has quite a range and really gets up there. I obviously took some parts down an octave, and arguably should have attempted a few more in the lower octave, but there’s no way to get better at your high chops without spending the time working stuff like this out.

Stevie Wonder - I Feel For You

P.S. Is this the first non-saxophone transcription that I’ve posted? I should do more of them, they’re harder!

I’m still on the Prince train, and I don’t see any sign of it slowing down any time soon! This time it’s the live NPG version of the incredible ballad “Nothing Compares 2 U”.

The liner notes don’t actually say, but I’m reasonably certain that the sax soloist is Brian Gallagher again. I read somewhere that it was Kathy Jenson (from the Hornheads), but I’m pretty sure that’s not true. I’m only familiar with her as an Alto/Bari player, and not tenor.

I really wish I could do this one justice. It’s a monster of a solo! The 5th bar is what really killed me, so I mercifully cut out the worst of the audio from my track and ducked the rest. But I got back on track the next bar. I can (barely) hit that high F#, but I can’t get up and down from it nearly as gracefully as Brian can. It’s amazing how fluidly he does it.

Interestingly enough, Candy Dulfer hits the exact same concert E her solo. It just fits. It’s high on Alto, but much easier to play than on Tenor (for me).

This is another solo that’s virtually impossible to read – you have to listen carefully and slow it down to really internalize the rhythms. The lines that he creates are so ornamented and intricate that there’s no other way.

Brian Gallagher - Nothing Compares 2 U

This is such a beautiful song! Most people associate it with the 1990 Sinead O’Connor recording (and music video), but of course Prince wrote it. He originally recorded it with ‘The Family’ in 1985. It was hard to find that recording, and not worth the effort (for me), although some people swear that the original is the best recording.

Rumor has it that Prince did a studio recording of his own that was never released. Maybe it will see the light of day eventually? Until then, I’m only aware of his two live recordings – this one, and the more famous one that he recorded with NPG. I’ll try to work up that solo too, but my tenor high chops may not be up for it.

Candy really kills it on this solo. The third bar of the solo is pure genius the way she builds such connects such complex (and yet simple) ideas so fluidly – and nails it! I probably spent about an hour shedding that bar alone and still can’t play it as smoothly as she did.

And just try to play that high part at the end in one breath like she does. I like to think I get some pretty big air (I play a LOT of bari), and I couldn’t make it through both measures in one breath. But she pulls it off somehow!

The written transcription covers most of the song until the time stops. I’m only uploading the main solo to YouTube so I don’t run afoul of the copyright filters.

Slow songs are always the hardest to notate and read, so I really suggest listening closely to the recording as you’re trying to learn it. That’s always the best way anyway, but on ballads it’s almost impossible to do any other way.

Candy Dulfer - Nothing Compares 2 U